Does the new Google and Vidyo Agreement Hurt WebRTC Partners? 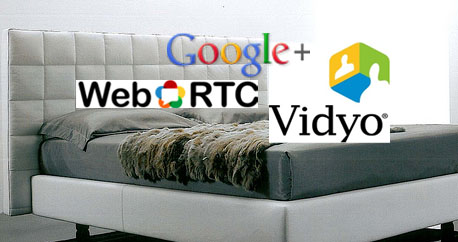 Google, the creator of WebRTC, has recently asked Vidyo to help develop a browser-native video chat solution for WebRTC, Venturebeats reports.  Vidyo, which has raised $120M in venture funding, has been disrupting the enterprise videoconference market and stealing thunder from traditional videoconferencing giants Polycom and Cisco with its software-only endpoints. As part of the deal, Vidyo’s scalable video codec (SVC) will be licensed by Google for use in Google’s VP9 video codec (which Google is pushing to use in place of the current VP8 codec being used in the WebRTC project). So what does this mean for the WebRTC market?

Currently Google’s own group video chat product, Google Hangouts, uses Vidyo instead of WebRTC.  Google has already poured out a tremendous amount of  time and resources into developing WebRTC (spending $200M to buy and open source GIPS and On2’s real-time voice and video technology as well as having huge engineering teams working on WebRTC for the past few years).  Personally, I predicted that Vidyo is only a stop gap solution for Google so it can have something for Hangout immediately, and that as soon as WebRTC is ready, WebRTC will replace Vidyo in its Hangout solution.

Given that WebRTC is seeking help from Vidyo, it seems that Google is acknowledging that despite its huge engineering team, it’s not achieving the industry-leading performance of Vidyo, and has thus decided to get Vidyo to help.

Will Current WebRTC Partners be Hurt?

I know dozens of companies who have made their bet on WebRTC API maturing fast enough to support commercially viable products.  If getting Vidyo’s help is any indicator that WebRTC’s maturity date may not be in the near future, then the success and even survival of these companies building on WebRTC may be in danger.

My take is that the startups that jumped on the WebRTC wagon 1 or 2 years ago may now be in trouble. If WebRTC is not yet mature, then these startups are burning cash and resources waiting for WebRTC to become better, and in the meantime are facing difficulties closing deals.

Is WebRTC Following the Fate of Flash?  Will Apple Strike Again?

Once upon a time Adobe Flash was supposed to pave the way to download-free video chat, but was largely derailed by Apple’s refusal to support Flash on its platform. In fact, Flash is still the technology behind many browser-based video chat services such as TokBox (now OpenTok) Megameeting, Vyew, etc., but clearly hasn’t lived up to expectations.  (To be fair, Flash was also never designed for interactive, real-time video chat, and its poor video performance in this area has also been a reason for why Flash-based video conferencing has never really taken off.)

In any case, WebRTC is still a long road from interoperability.  Currently, it’s supported on Google Chrome, Firefox, and Opera browsers, which still leaves Apple Safari and Microsoft Internet Explorer out of the WebRTC picture. Meanwhile, Microsoft is adding to the uncertainty by developing its own version of WebRTC, dubbed CU-RTC-Web. Even with Firefox supporting WebRTC there are still cross-browser compatibility issues, according to AnyMeeting founder and CEO, Costin Tuculescu. Without support from these major players, the goal of interoperability and one of the main advantages of WebRTC would be lost.

There is no doubt that WebRTC’s future is exciting and full of endless possibilities. It makes it that much easier to create voice and video communications services by using HTML and putting everything into the browser.  It also has the advantage of outperforming Flash by far (so much so that OpenTok which had originally staked its platform on Flash is working to move over to WebRTC and now has a WebRTC-based SDK).  Keep in mind though, that WebRTC is still in its infancy, and while WebRTC is open source and free, the technology is evolving and growing. With browser, codec, interop updates, and various network issues, it still has numerous web integration challenges that need to be addressed.

The comments are now closed.

*Free VSee is always secure; if you need a BAA for HIPAA compliance, contact us

Or other health-related professional or staff member

Looking to use VSee to communicate with my provider